The first of the month is always stressful with my job. Everyone wants their statistics RIGHTNOW. But I love my job, so I really can't complain too much...
Why am I telling you this? Well, on the first of the month, I'm always ready to come home, and today was no exception. But as I pulled out of the parking garage and onto Utica for the ride home, my husband called, sounding rather frantic. He stammered, "Pot Pie needs to go to urgent care. He needs stitches in his head." For once, I was the calm one. I told him I'd be home in a few moments. When I came in the house, Pot Pie had a towel on the back of his head, and when I say it was covered in blood, this is not an understatement. I quickly got the run down of how this injury took place. Apparently, Pot Pie had been running while carrying an exercise ball through the house. A collision occurred when he ran into Cutie Pie, which caused him to ricochet backwards and hit his head on the corner of the wall, creating a large gash on the back of his head. Pot Pie and I climbed back in the van, and back to the hospital that I was so eager to get away from earlier. He sat patiently while we waited for the doctor, and he was a trooper, even when they gave him shots to numb the area. After it was numb, the doctor put staples in to close the laceration, and he was excited to get his head wrapped in a bandage, or as he put it, "It looks like I just got out of battle!" 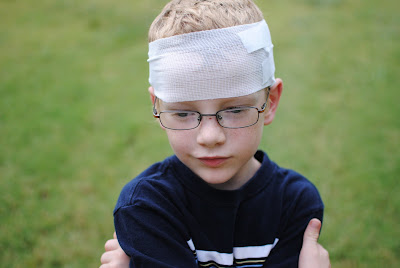 After we left Urgent Care, we went for dinner, and then came home, where he ran around the neighborhood taking pictures for potential entries into the Tulsa State Fair, and of course this includes snapping a photo of our crazy neighbor, Mr. Habib! 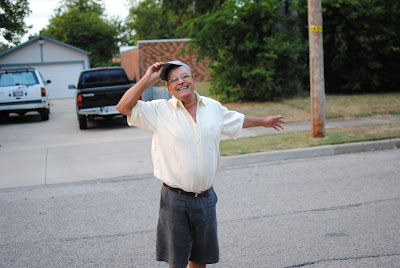 All in all, what could have been a headache (pun intended) was just another crazy night at the Ryan house!