When school started this year, we were all excited. Pumpkin Pie was starting Kindergarten. I was afraid that he should have stayed in pre-k; due to his size and his speech delay, I didn't want him getting frustrated with not grasping new things and then hating school. Pot Pie was more than ready for first grade. He was reading pretty well, and we already knew we loved his teachers. Cutie Pie had been looking forward to third grade all summer. We had started working with him on multiplication tables and we had asked around to the other teachers and the teacher he was assigned to came highly recommended from everyone we talked to.

Needless to say, it came as a complete shock to us when Clint called me upset after school on the third day. He told me that Cutie Pie's teacher asked if he was on any medication. When Clint said no, he informed me that she replied he ought to be. Based on the information that we had been given about her, I was slightly less ready to get worked up about it than my husband, who is a protective papa bear. :) I tried to reason with him, that she had about 30 years of experience with third grade students, and that we needed to be open to her suggestions.

The next morning, I spoke to her, and she relayed to me what a difficult time he was having paying attention; that he couldn't finish any assignments in the time she gave him. She told us he seemed to be unable to focus, and she recommended he be evaluated. That day, when I got to work, I immediately called our insurance company, who directed me to a play therapist. I got him an appointment for that day. His evaluation went smoothly, nothing seemed to jump out at the therapist as a potential issue. There were no red flags. I told her we were afraid he had a learning disability, or at the very least, a reading delay since he had tested below grade level. She recommended we get a reading tutor, and if we still felt he needed to be evaluated for attention issues, she referred us to a psychiatrist.

After I took him back to school, my sister-in-law, who has truly been my rock and my shoulder to cry on (albeit, usually through texting because she's crazy busy too) through this whole mess, told me about a reading tutor. I called and scheduled an appointment. Then, I called the pyschiatrist and scheduled another appointment. Then, I sat in my office, and cried. I felt like a failure...the worst mother in the world. I felt like I wasn't supposed to be the mother of a child with ADHD. With everything we went through with Pumpkin Pie, all the time in the hospital, all the speech and occupational and physical therapy, the constant reminder of his speech delay when I ask him to repeat himself or tell him I can't understand him, I should have been able to handle this. But it just seemed like a huge blow. That night, as I sat down to help Cutie Pie with his homework, I noticed how hard it was for him to stay on task. He was fidgeting, easily distracted. He couldn't sit still. I constantly had to redirect him to his paper. It was an unbearable 2 hours. The next day, it was the same thing. After a week of this, we couldn't wait for his appointment with the psychiatrist. While we waited through that agonizing month, it was never far from my mind what we were facing. I laid in bed at night, trying to figure out where we had gone wrong. Too much TV? Too little reading time? Did we praise him enough? Did we baby him too much? I emailed a mutual friend of ours from our old church, who is a mental health professional, and asked him every question I could come up with. He answered each one, and informed me that I needed to quit trying to be a perfect parent, because they don't exist.

One weekend, Clint's brother, who I absolutely love and respect more than he can even imagine, who loves our boys and is one of very few that I feel we can truly count on to be in our corner, came over and told us about a conference he had been in where they talked about lead poisoning being a cause for attention deficit disorder. Immediately, my mind raced, and I googled everything I could find on the the link between lead and ADHD. I was absolutely dismayed. For five years we've lived in our 80+ year old house, which probably has 5 coats of lead paint on the wall underneath the 3 we've painted since we moved in, and we've done a ton of work. I just knew that we had stirred up so much lead dust over the years that surely this was what caused Cutie Pie's ADHD. I felt absolutely helpless thinking, "Great, I have a son with ADHD, and now we have to move as soon as possible.", which started all of these other feelings of hopelessness about the dismal prospect of selling our home in the current real estate market. I called our pediatrician's office and got a referral for 3 blood tests. I had to know. Everyone I talked to told me it was highly unlikely, that they'd have to be eating lead paint chips 24/7 for it to cause any adverse effects, but I wouldn't rest until I knew for sure. We took the boys to get their blood drawn, and then waited an excruciating 7 days for the results, which all, thankfully, came back negative.

Finally, the time came for his appointment with the psychiatrist, Dr. H. She and I talked for an hour, while Cutie Pie sat in front of me and played with the toys in her office. After we spoke, she recommended that he be put on a low dose of medication. She told me the pros and cons of different kinds of medications. I asked her just one question.

"Will the medicine change his personality?"

At that moment, I broke down, trying to cry quietly so he wouldn't notice. I couldn't stand the thought of losing my little boy with the ability to create these amazing sculptures out of Legos, who could sit and sew with me for hours, who makes me laugh with his hilarious outlook on anything and everything. He is so creative and so loving and with a huge heart for helping others, with a huge faith and the ability to talk to God in prayer as though they are sitting across from each other. I refused to put him on any medicine that would change him. She assured me that we could try the medicine, and if we didn't like the result, we could just stop giving it to him, because it wouldn't stay in his system.

That night, I filled his prescription, and started him on the new medication on a Wednesday. I didn't tell his teacher right away that he had started it. The doctor told me not to tell her, because she wanted to see if his teacher would notice a difference without being clued in. After a few days, I asked and his teacher did say she noticed a change in his classroom performance. She said he was able to complete his work, and he was obviously listening more and answering questions. Initially, Clint was really upset with her, but truly she has wanted nothing but the best for Cutie Pie, for him to get the help he needed. We are very blessed to have her as his teacher.

When this whole experience began, we both refused to believe he needed medication. We vowed to do anything we could before we started him on medicine. But now, after being on the medicine, after witnessing the abrupt change, like a light switch was flipped on, Cutie Pie is feeling much more confident in his abilities, and after struggling for so long, its very relieving to watch him come home with less homework since he's finishing more in class, and to complete his homework quickly and with a greater understanding than before. He called me right after school when he made his first 100 on a spelling test. He's still in reading tutoring one night a week, but he's making swift strides, and has already caught up to grade level. We're thrilled with his progress. With the recent advances he has made, we felt a good reward would be something he's been requesting for awhile: a guitar. He started lessons today, and we are excited for him to be passionate about learning to play. This whole experience has shown me once again that I have to trust in God, that I can't make everything right. I have to accept the assistance that is out there, and that people who care about us and about Cutie Pie were put here by God to get us through this endeavor and onto the other side, far away from the issues that plagued him. We are blessed. 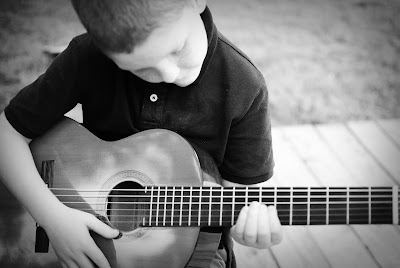 What a great post! As someone dealing with the same struggle, THANK YOU for writing it!

We had a very similar experience. If you ever want to chat, let me know :)