Broken Beau, 'Round the Table, and Family Dominoes 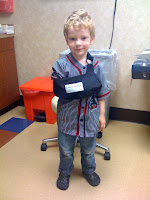 I don't think I have blogged about this as of yet, but Beau has a broken arm. It was such a freak occurance. He happened to fall on it at just the right angle, and after a conversation with the medical director of the urgent care physicians, I learned that the initial x-ray just barely missed the fracture, by mere millimeters. With the missed fracture, Beau walked around for 6 days with a broken arm...falling on it at gymnastics, attempting to use it at the request of my husband and I who thought that if he used it after what we thought was just a contusion he would get better, and favoring it so that it wouldn't hurt, never really letting us know how bad it was hurting him. He's healing well, says the orthopedist. We keep him in the sling for a few more weeks, and then he should be back to normal. 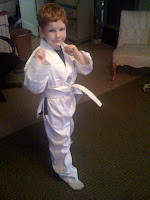 I hate to admit it, but to keep my blogging integrity, I must. Beau has gas...constantly. I swear, he could probably fart on command. Today was no exception. I was playing with Beau and Jack while Clint and Luke were at Tae Kwon Do, and amidst the fun, Beau let out a very stinky poot. And then another. Perhaps a more proper mother would have thought before she spoke, but I, for some reason, couldn't stop myself, and I called him a... 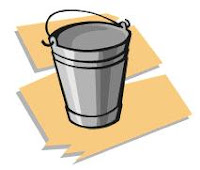 You would have thought I was the headliner on a comedy tour. Beau practically had tears coming from his eyes from laughing so hard at this new word I introduced into his vocabulary today. Sorry, Mrs. Davis...
A short time after I thought the moment had been forgotten, we were sitting at dinner. As we quietly ate, Beau, again, passed gas. This time, Clint commented on his gas, to which Beau replied, "I know! I'm a fart bucket!"
The look I got from my husband was one of bewilderment and shock. Perhaps he had never heard the word uttered before this evening, and certainly not from one of our children. I quickly stuffed my mouth full of smothered chicken and green beans, so that when my husband asked me where he could have possibly heard that word, I was able to just shake my head and, with a mouthful, mumble an inaudible "Idunno..." Of course, Beau gave me up, and Clint just shook his head at me. Oh well, there are worse phrases in the world. 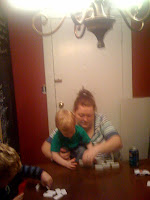 After dinner and some homework, we played a fun game of dominoes as a family. It was hilarious to watch the boys and their fun competitiveness. Luke loves games of all kinds, and Beau loves to play dominoes, especially if he can have the double blank. Jack just likes to steal the dominoes...but fun was had by all!