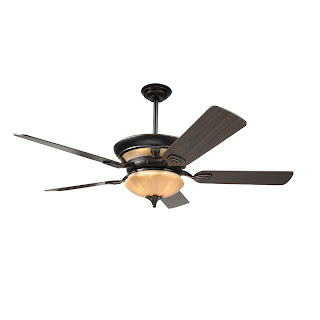 We bought a new ceiling fan for the living room. It was more than I wanted to spend, but I loved it, so we went ahead and splurged. We got it home and Clint immediately put it up. We turned it on and marveled at our how brightly it lit up our living room. About a week later, we noticed that the top light was dimmer than the bottom light. We figured there was something wrong with it, so Clint took it down, returned it to the store and got new one identical to the first one. He brought it home, installed it, and it worked fine. But then, about a week later, we noticed the bottom light was now dimmer than the top light, and after much complaining on my part, Clint took it down, took it back to the store and got another new one identical to the first two. Again, Clint brought it home, installed it, and it worked fine. After about a week, the third one was dim on both the bottom and the top light. Clint refused to take the ceiling fan down a third time. For about 4 weeks we lived with hardly any light in our living room. It was beginning to get unbearable. Then over the weekend, Luke was playing with the remote for the ceiling fan when both lights came on as bright as the day we installed the fan. Clint and I looked at each other, our mouths gaping open, as we finally realized that the ceiling fan had a dimmer.