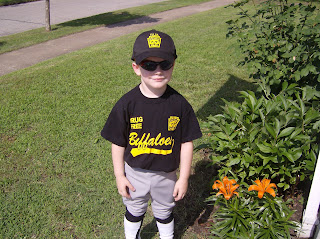 Luke had his first T-ball game last Monday night. He looked so adorable in his uniform. His team was first at bat, and he got up there, hit the ball and ran to first. When it was the other team's turn to bat, he got out in the field and the coach placed him right between first and second base. At the previous practice all they had done was practice getting the ball and tagging the runner before he got to first. The first batter hits the ball directly to him, and he started running for it. For a brief moment, I was more proud than I have ever been in my entire life. I just knew that he was going to get the ball and tag the runner, that he really understood how to play the game...but this moment was fleeting. As the ball grew closer to him, just as he should have bent down to pick it up, he ran right past it...and tackled the runner to the ground. It was the most hysterically embarrassing thing I have ever seen. He got up with a huge smile on his face, thinking he had done exactly what he was supposed to. His coach out in the field was laughing so hard that he couldn't even direct Luke not to tackle the runner. We're looking forward to many fun moments to come...especially since we're playing two nights a week for the next 8 weeks.