As the March of Dimes Ambassador family for Tulsa, we were given the privilege of attending the formal fundraiser event, the Gourmet Gala and Chef's Auction, this past Saturday night. 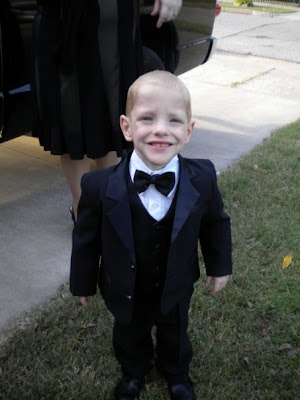 Jack-Jack was given his very own chef's jacket, and he had a blast being the center of attention, eating all of the pumpkin cookies he wanted, and showing off his brand new shoes! 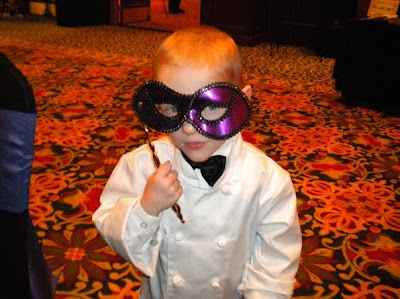 It was truly a night in heaven for the amateur foodies of the Ryan house. Over 20 of Tulsa's dining establishments, including Michael Fusco's Riverside Grill, Bodean Seafood Restaurant, The Brasserie, The Chalkboard, and many others, provided food for the event, giving the guests a chance to sample some of the tastiest tidbits around! The Star Chef Chairman was Michael Fusco himself, who has worked with this charity that is near and dear to our hearts for years! It was a pleasure to meet him, and we look forward to enjoying dining in his restaurant in the future. 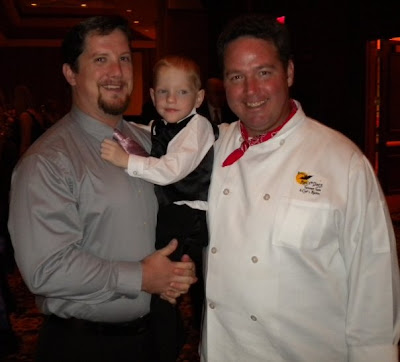 Everything we tasted was FANTASTIC! We started on one side and just worked our way around. The first table we came to was from a couple of guys from Oscar's Gastropub. These guys were serving a flavorful pork tenderloin with rosemary mash. It was a great way to start off the evening!

Next we were on to the dish prepared by the Chef Chair, Michael Fusco. 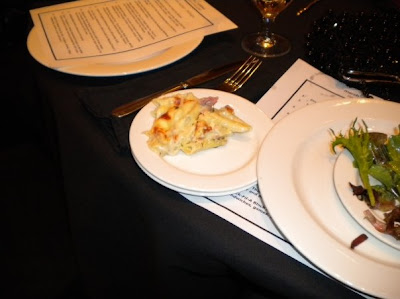 He had planned to make a smoked chicken lasagna, but unfortunately, the dish he made was upset from its perch on a serving rack onto the floor below, and he had to make a brand new dish. How infuriating! However, this ziti was delicious! I'm sure he's adept at making any difficult situation come out appetizing!
Next we went on to something a little more adventurous. On the right side of this plate on the triangle is foie gras pate from The Brasserie! It was not what I expected...though it was very tasty! Its just one of those foods I wanted to mark off of my Consumable Bucket List. 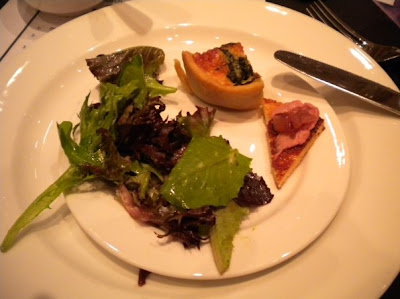 Next was a perfectly delectable bowl of lobster bisque from Bodean Seafood. It was warm, savory ladle-full of perfection in a bowl. The picture I took does not do this dish justice. 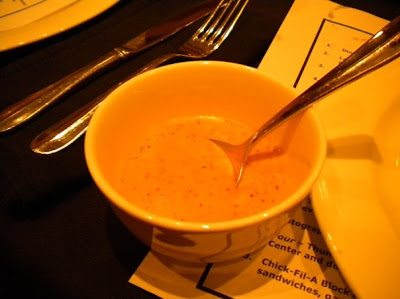 I have been dreaming about it since this Saturday night...
With all of this yummy food around, Jack-Jack was able to eat anything his little heart desired.
His pick? Chick-Fil-A. 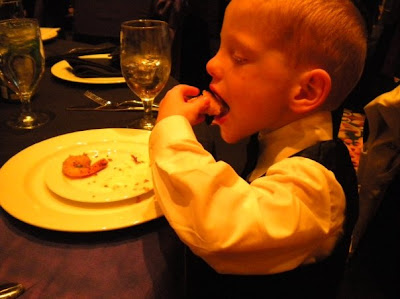 Can't go wrong with chicken nuggets.
It was such a great event, which raised a lot of money for a great organization, and we had a blast! We look forward to attending every year from now on!
Mmmm...lobster bisque... *drool*