Yesterday was an anniversary of sorts…

First, let me preface this with a brief history.

It was October 29, 2000…I was sitting in my dorm room at Northeastern State University in Tahlequah, chatting with some friends on CollegeClub.com. (It was a rudimentary version of what would become the likes of Myspace and Facebook.) A chat request came from someone named Hatchet69.

Hmmm….sounds like a perverted serial killer, I thought to myself…but basking in the anonymity of the Internet, I accepted the request anyway.

I don’t remember exactly what we talked about, but I do remember enjoying our conversation…I don’t know why, but I felt drawn to this faceless individual. We hadn’t even exchanged pictures, but by the end of the conversation I had agreed to meet him for dinner.

Fast forward 23 hours…there I was, pulling into the 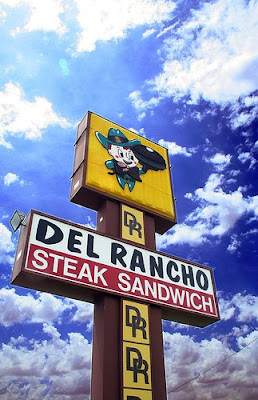 parking lot of Del Rancho, thinking to myself, “WHAT AM I DOING? No one even knows what I’m doing or where I am. This is the stuff that Lifetime movies are made of. I’m going to be just another dumb girl statistic! STUPID! STUPID! STUPID!”

I took a deep breath, got out of my car, and out of this huge black pickup truck hopped a cute guy in black Wranglers and with a shy smile. There was an awkward moment where I was trying to figure out if he was Hatchet69 and he was trying to figure out if I was NSUTheaterGrl. We laughed nervously and went inside. Over dinner, the awkwardness subsided, and we were soon having a good time. After dinner, we went looking for a movie, but couldn’t find one, and I mentioned the Haunted Castle. The 20 minute car ride to Muskogee was nice. We sat on opposite sides of his truck with the middle console down…I rested my arm on it for a moment. I wanted him to hold my hand, and was engrossed in thinking about moving mine closer to his when he grabbed mine. It caught me off guard and I yanked my hand back to my lap in reaction. He sheepishly shrunk back over to his own side, and for the second time that night, found myself saying in my head “STUPID! STUPID! STUPID!”

I have always been a fan of scary attractions, and he wasn’t about to tell me that he didn’t like them one bit. When we entered The Castle, he wrapped his arms around me and held on tight the entire time. He was unbelievably scared, but didn’t want me to know, and there was no way I was going to let on to him how obvious it was.

After The Castle, we weren’t ready for our date to end. He shyly asked if I wanted to meet his grandma and grandpa. I thought his request was absolutely adorable, and so we drove out to Ma and Pop’s house. We visited with them for awhile, watched some bull riding, and then headed back to my car, neither of us ready for the night to end.

When we got back to Del Rancho, it was close to midnight. I had class the next day, and he had to be at work in Broken Arrow. Still, the impending fatigue we were going to feel the next day couldn’t get either one of us to leave any faster. We sat and talked for a long time that night, and then one of us would remark on how late it was, only to end up talking about something else, until we realized it was 7AM.

The rest, as they say, is history. Four months later, we were engaged, and three months after that, we were married. Now, eight years and three kids later, we are still going strong.

I feel so blessed to have found such a wonderful person to spend my life with. He’s my rock, my best friend. He can make me laugh, even when I’m frustrated with him. He works hard to provide for his family, going in before everyone else to get off in time to pick up the kids from school so that they don’t have to go to after-school care. He has a handsome smile, a kind heart, and beautiful blue eyes that still make me melt. When he sends me an email during the day, or text messages my phone just to check in, I can still get butterflies in my stomach because I am so happy to hear from him! I love him more today than I ever could have imagined that night back in the parking lot eight years ago…

That is a great story.....and you are a great writer.....really enjoyed it. I love following your blog and hearing about your family. Your 3 boys are so adorable. I am married to Clint's mother's cousin, David, and love to keep up with extended family through your blogs. Linda Hill

What a great story!
I am glad you went in that restaurant or you would not be my SIL!

What a cute and sweet story! You had me cracking up with the whole "lifetime movie" part of your story.