Today was a super fun day. Actually for two reasons...one being that it was the first day I have left the house since Wednesday, considering I haven't been able to sit up without puking. You see, I had a very minor dental procedure on Wednesday that left me feeling a little dizzy Wednesday night, followed by a night of said hurling, followed by an entire Thursday of not eating for fear of hurling, another night of sleepless migraine-induced dizziness, a Friday spent in bed, finally braving dinner that evening, and waking up Saturday morning, not feeling entirely 100% better but picking myself up by my boot-straps because my Indiana Jones needed his jacket. Which brings us to the second reason it was a fun day. It was BooHAHA on Brookside, the annual prequel to the big show (aka Halloween Night Trick or Treating), where all of the businesses on Brookside hand out candy to hundreds of Trick or Treaters. We don't necessarily go out for the candy. In fact, there are so many Trick or Treaters that its really not too fun to attempt to get candy. We prefer browsing the other costumes to standing in lines. We didn't see very many Indiana Jones costumes today, but Luke got quite a few compliments about his, and I beamed every time. Of the homemade costumes, I think Luke's was in the top 2...the only reason I don't say his was the top is because someone had an absolutely fantastic Wall-E costume. Check it out for yourself! (Ignore the mess in the background...gimme break...I've been super sick) He fits the part, don't you think? 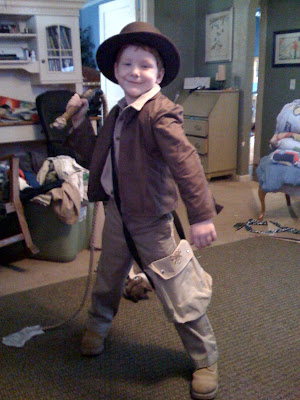 Beau and Jack were also super cute today, even though I can't take credit for their costumes besides finding the Transformer online and the Dinosaur (yes, I know its really a dragon...just don't tell Jack) on sale at Old Navy. 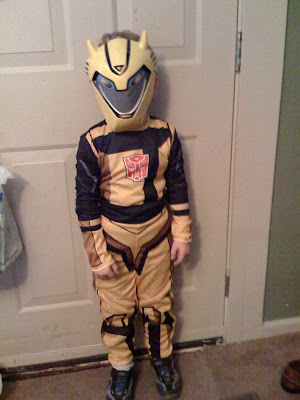 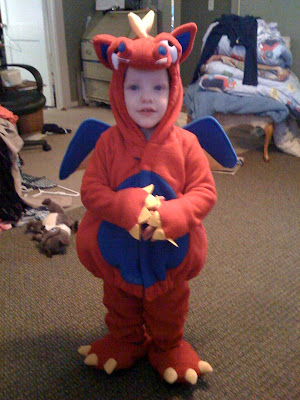 After BooHAHA, Beau attended his first classmate party! His friend, Victoria, had an awesome Halloween Party at her house, and Beau obviously likes her a lot. They were attached at the hip most of the party, either jumping in the Jupiter Jump or playing in the backyard. It was so cute to watch them! I had a blast meeting his friends and their parents. Beau is already talking about his 5th birthday party and inviting all of his friends. Too much fun! Here's Jack wearing one of Beau's party favors... 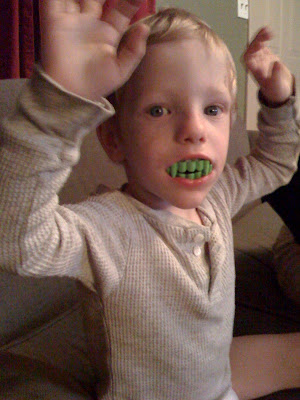