Luke has become very entertaining lately. He loves to spike his hair because he says it makes him look "handsome". 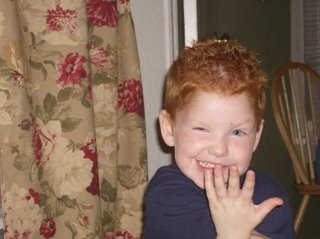 He has said some of the most hilarious things lately! The other night we were out to dinner and he stated, with a mouthful of whipped cream, "Look! I'm a rabid squirrel!" Its funny to listen to how much his vocabulary has expanded since he's started school. He's started using words like "actually" and "therefore".

A few weeks ago we had parent teacher conferences, and Luke's teacher said that he is a very theatrical child and that when they are reading a story he takes on the characters very well. For example, she said when they read about doctors, he puts on a lab coat and walks around with a clipboard, asking everyone how they are feeling. Or if they are reading about a farmer then he will grab a stuffed horse and say "This is my horse. You can pet him. He won't bite." She said that really helps the other kids with pretending and she can always count on him to make story time more fun. Right now they are reading "The Three Little Pigs" and every day he gets to play the Big Bad Wolf.

He has convinced all of his classmates that a cool word is "Maniac". On Friday, we were leaving school and the wind was blowing all of the leaves around. One of his friends said, "Hey Luke! Those leaves are flying around like maniacs!" He then stopped to talk to her through the fence, and I couldn't help but snap a picture. It looked as though he was hitting on her... 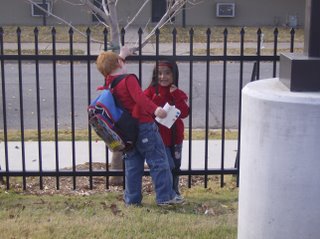